RADIO and television presenter Nicky Campbell has revealed he has dropped two jean sizes, after cutting bread, red meat and chocolate from his diet.

Campbell, 55, made the announcement whilst presenting the BBC Radio 5 Live breakfast programme this morning, but was labelled “smug” by his co-presenters.

The former Wheel of Fortune presenter said he had dropped from a 34 inch waist to a slender 32″ after altering his diet, and said he was “feeling very pleased” with himself. 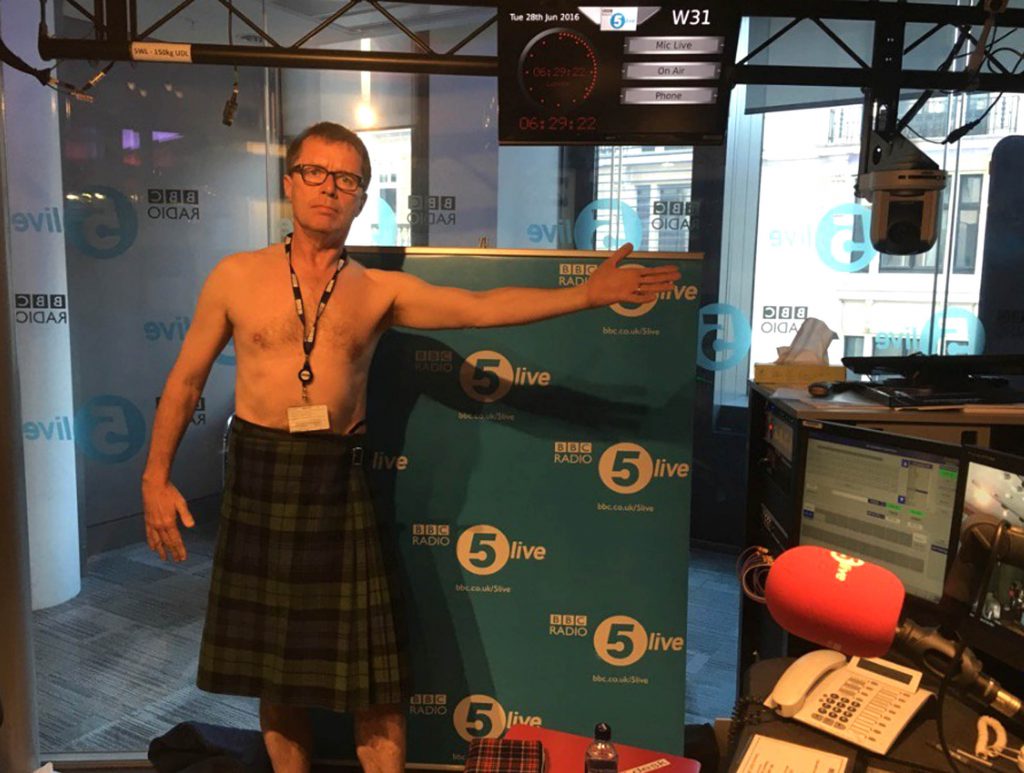 But co-presenter George Reilly sarcastically praised him for the revelation, whilst Rachel Burden said he was “smug but very bored”.

Starting the exchange, Campbell said: “I’ll tell you what, I’m very, very pelasd with myself, because I went to buy some trousers, not leather trousers Theresa-May style, I had to go and get myself some new jeans because my 34s are just falling off.

Campbell replied: “Two waist sizes. No chocolate, no bread, no red meat, I tell you.

Reilly butted in and quipped: “You’re living the life aren’t you?”

Campbell showed off his already slender figure back in June, when he forced to come into work in just a kilt after England lost to Iceland at Euro 2016.

Campbell was so confident that England would win, he said he would present the breakfast show “in a kilt and nothing else”.

Shortly after England’s loss, he tweeted: “I said that if England lose I will present the breakfast show in a kilt and nothing else. This will sadly happen when I am back in Salford.”

And on June 28, he shared a photograph taken at the BBC offices in Greater

Manchester showing him naked from the waist up, donning a tartan kilt and his work pass around his neck.