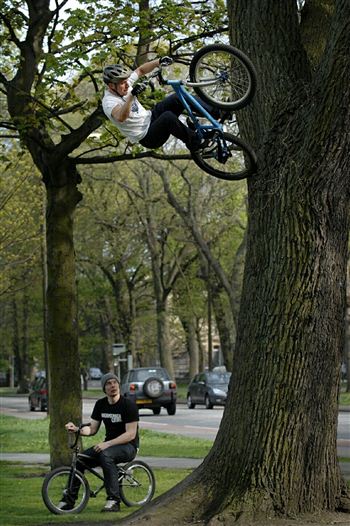 A SCOTS stunt cyclist has attracted millions of online fans who are amazed at his dangerous stunts and jumps.

Danny Macaskill, made his debut mini-film Inspired Bicycles on a shoestring budget, and the five minute film has been viewed by over three and a half million times by You Tube fans since he uploaded the video.

And his latest stunt movie, Mountain Bike Trickster, is all set to follow its success and has already been seen by over 100,000 fans since the weekend.

The 23-year-old biker is seen carrying out seemingly impossible tricks including jumping across rooftops, dropping off bridges and speeding along thin railings.

His antics are performed in front of some of the capital’s most recognisable landmarks including the Scottish Parliament, the Commonwealth Pool and the Meadows.

The biking sensation, originally from Skye, but now living in Edinburgh, has been practising his dangerous moves for around 12 years.

He said: “I used to ride my bike on Skye as a kid, jumping off grass banks and mucking about in the streets. I have still got the same attitude – I just like to muck around and zoom about the place.

Danny gave up work as a bicycle mechanic last month to pursue a full-time career with the five-man bike stunt crew The Clan.

The daredevil group have been holding showcases for the past year and are due to make an appearance at the Mountain Bike World Cup in June.

“He is probably the most talented biker of his kind in Britain and what is more refreshing is that there is no ego involved.

“It’s awesome to see that kind of talent come out of Scotland. You don’t have to like bikes to appreciate the video – it just has that wow factor.

And although Danny has broken his wrist and dislocated his index finger over the years, he would encourage anyone to give biking a go.

Team mate Iain said; “We make sure people know it takes hard work to get as good as Danny. It isn’t going to happen overnight – it takes ten to 15 years of dedicated practice.

“We like to stress that people should be safe, but also encourage bikers not to shy awat from the risk factor.

“Ride and have fun, but wear a helmet and know your limits.”