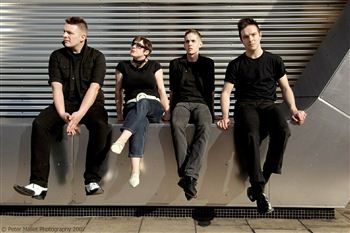 GLASVEGAS frontman James Allan is moving to the States to write and record the band’s much-anticipated second album.

The Mercury Prize-nominee wants to buy a house near Los Angeles.

And he says he wants to move the whole band in together – because he wants them to “be like the Waltons”.

Allan, 29, told BBC 6 Music he has already penned the lyrics to the band’s follow-up to their eponymously-titled debut.

But recording will have to wait until they have completed summer tours with Kings of Leon and U2.

He said: “We’re touring with U2 in summer, then Kings of Leon in America, and then I’m going to stay in Los Angeles.

“Going to put down the demos, got to buy a house, the band are coming over, we’ll be like The Waltons.

“We’ll do the demos and then we’ll just record at Christmas-time or early January.

“Hopefully, by the time the leaves are grown on the trees and the daffodils are starting to bloom, that’s when out second child will be born.”

Allan, a former-professional footballer, has also admitted he expects Glasvegas to walk off with this year’s Mercury Award and the £20,000 prize because of the amount of effort the band put in to record the album.

He said: “You’ve got to understand that with the euphoria and the heartbreak that you put yourself through making a record – I really did have nothing left in me.

“I was on my f***ing knees by the end of this thing man, more than you’ll ever be able to f***ing imagine. So with that then, I expect to take it.

And fellow nominees Florence and the Machine are also backing the Glaswegian four-piece.

Singer Florence Welch said: “It’s amazing. I’m really proud of them and I’m excited for them.

“The whole thing is that I don’t feel like this is a competition really, I think it’s a celebration of music in all genres and it’s a really great equaliser.”