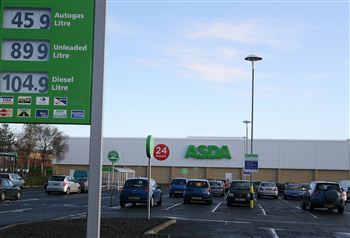 CONTROVERSIAL plans to erect a massive wind turbine in a supermarket car park have been given the go-ahead.

Retail giants Asda are keen to go green at their flagship superstore in Kirkcaldy, Fife.

But locals have described the move as “a disgrace” and are threatening a boycott of the popular store.

The turbine’s blades will span almost 15 feet across and will provide enough energy to power half the store’s checkouts for six months.

The 19-metre white and grey installation, which is to be positioned next to the supermarket’s petrol station, has eventually been granted planning consent from Fife Council.

But fears have been raised by furious locals who live close to the store about possible noise pollution from the turbine at nights.

However, council bosses have given the go-ahead after they said the noise levels would be “below background or ambient levels” and that noise from passing traffic would be louder than the turbine itself.

Claire Thomson, an objector who lives nearby, said: “The Council doesn’t understand that in the winter time when there are no leaves on the trees to help block the sound and there is not as much traffic at night it will be noisy.

“When Asda was working on its car park recently I couldn’t open my windows because it was so noisy.

“It’s fine for the council to approve this but it isn’t the one living directly across from it.”

And her elderly neighbour, who wishes to remain anonymous, said: “It’s a disgrace that the plans for the turbine have been given the go-ahead. I can’t believe the council is putting Asda ahead of its tenants in this matter.

“The noise will be ridiculous and I, for one, will not be setting foot in there again.

“It’s all well and good for the council to make this decision because they won’t have to put up with the noise.

But, Lisa Rooke, Asda’s property communications manager for Scotland, claims the eco-friendly turbine will help reduce the supermarket giant’s impact on the environment.

She said: “We are extremely pleased the Council has granted permission.

“This wind turbine will generate approximately 15KW of electricity for the store, which is equivalent to the power required for a minimum of seven homes within Kirkcaldy.

“We are committed to implementing measures that reduce our impact on the environment, reduce our carbon emissions and improve the energy efficiency of our stores.

“The turbine is one step towards these aims and we look forward to delivering it.”

A spokesperson for Fife Council said: “The principle of developing a single turbine is considered acceptable and meets the terms of the Development Plan, the Draft Local Plan, National Guidance and non statutory guidance.

“In landscape terms, the proposed turbine is a well proportioned structure and the photographic montages submitted by the applicant illustrate the simplicity of the structure and its ability to sit comfortably within the immediate environment.

“In noise terms, the assessment submitted by the applicant has adequately demonstrated that the predicted noise output of the turbine would be well below background noise levels and are within the limits set by guidance.

“The proposal is therefore recommended for conditional approval.”