A VOLUNTEER lifeboat member narrowly avoided serious injury after being pushed off his vessel by a rowdy drunken youth.

William Black, the RNLI lifesaver, missed the vessel’s propeller by inches after being barged into the water by boozed up Andrew Wood, 18.

Police were forced to chase Wood and his pal Lee Mackie, 17, after receiving a call concerning alleged vandalism to a shop window in Anstruther, Fife, about 7.30pm on Wednesday evening.

The thugs tried to avoid capture by jumping into the town’s harbour and swimming out to a nearby rock crop.
The Anstruther RNLI inshore crew were quickly alerted and a four-man crew was dispatched to rescue the teens.

But as the lifeboat approached the pair, the crew were met with a volley of abuse and the two culprits initially refused to jump aboard the vessel.

The pair eventually relented but as the lifeboat approached Anstruther harbour, Wood began to struggle violently and barged Mr Black into the deep water.

The yob also ended up in the chilly River Forth.

The crew were then forced to pull Wood and the lifeboat member to safety. 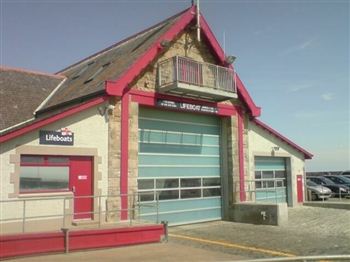 And as the boat approached dry land, the sodden youth jumped from the vessel in a vain attempt to escape capture by the waiting police.

After a short chase, officers found and arrested the teenager in a nearby park.

The pair appeared at Cupar Sheriff Court yesterday and both pled guilty to affray and attempting to pervert the course of justice by evading police capture.

None of the crew members were available for comment yesterday but a spokesperson for the RNLI released a short statement.

She said: “HM Coastguard received a call concerning two men in the sea at Anstruther harbour.

“The Anstruther lifeboat was called out and went to the pair’s rescue.

“Both men were safely taken aboard the RNLI vessel and were handed over to the local police.”

A Fife Police spokesman said: “We can confirm two men were rescued by Anstruther inshore lifeboat crew on Wednesday evening.

“The two were arrested and charged with affray and attempting to pervert the course of justice by trying to evade police capture.

“An 18-year-old man was also charged with assaulting or hindering a lifeboat crew member who was attempting to rescue him.”

The teens will be sentenced later.