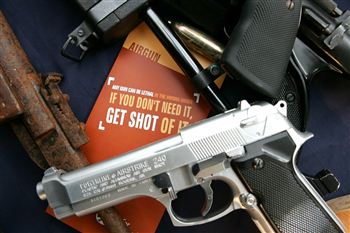 A NEW agreement between Westminster and Holyrood could see air rifles being banned from Scotland’s streets.

Scottish Secretary Jim Murphy secured the deal, which sees the authority over the weapons being transferred to the Scottish Government.

The decision comes four years after Scots tot Andrew Morton was gunned down just yards from his Glasgow home.

His parents Sharon and Andy – who have been campaigning for the weapon ban since Andrew died – have welcomed the deal.

Sharon said: “This is the best Christmas present we ever could have wished for.

“This might not be the end, but I feel we have turned a corner and it’s certainly the beginning of the end.

“I feel we are fulfilling the promise to Andrew that we made at his graveside, and that is for a total ban on airguns in Scotland.”

Andy, 35, said: “All the political parties have now accepted the principle that this is an issue which should be decided at Holyrood.

“And at Holyrood, all the parties have supported us. If this ban goes through, we will be rid of the 500,000 airguns on Scotland’s streets.

“As far as I am concerned, you can call it Andrew’s Law.”

Details of the deal are in the UK Government’s White Paper responding to the Calman Commission that is to be published soon.

But the Scotland Office refused to confirm the deal.

A spokesman said: “The UK Government will set out its response to Calman very shortly. Air weapons will be dealt with as part of that.”

Mark Bonnini – who murdered two-year-old Andrew when he stopped in the street to look at a fire engine – was jailed for at least 13 years.

And since the tragedy, UK legislation of airguns has been tightened so that the minimum age to own an airgun is now 18, mail orders have been banned and all retailers must be registered.

The new legislation is unlikely to become law before the General Election due to be held next year.