Paintings of tragic artist to be auctioned at special sale 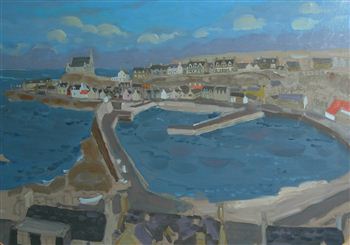 THE signature works of a Scots artist who tragically died in a car crash are to be auctioned at a special sale to honour his life.

Alastair Flattely and his wife of more than 50 years, Sheila, were killed last May near Dorchester. He was 86.

Tomorrow more than 200 of Flattely’s paintings, many of them landscapes of Spain, and of his home in Gloucestershire, will go under the hammer at Lyon & Turnbull in Edinburgh.

The lots are expected to fetch to up to £1500 each, with many of his works already held at the Royal Scottish Academy, public galleries across the UK and by the Duke of Edinburgh himself.

“The sale represents his life long work as a distinguished landscape painter, teacher and administrator.

“Many of his paintings have been acquired by important public, corporate and private collections and the sale offers the last chance to buy some fantastic examples of his work.”

Flattely found his talent’s lay in landscapes while serving in the Second World War with the Royal Artillery Regiment in Italy.

He spent his spare time drawing and painting while suffering from bronchitis, a condition that would end his army career.

The Inverness-born artist went on to study at the Edinburgh College of Art in 1945, and studied under several famous Scots painters, including William Gillies.

He left in 1951, the year before Sean Connery became a life model at the prestigious art school, to exhibit his work and to take up a post at Gray’s School of Art in Aberdeen.

His collections were displayed at L’Institut Français Ecossais from 1952, the Wildenstein, in Bond Street, London from 1956 and the Scottish National Gallery of Modern Art, in 1962, among others.

Flattely later joined Gloucestershire College of Art and Design in Cheltenham as vice-principal, developing their courses, in what would become one of the largest independent schools in the UK.

During his career his continued to exhibit his work and even had a large sale of his work in Edinburgh in 2003, where 80 per cent of the lots were sold.

He retired to his home in Beaminster, Dorset, where he continued to paint until his death last year.

Special meeting called to pay tribute to the Duke Of Edinburgh

How diminutive artist became the poster child for celebrity culture