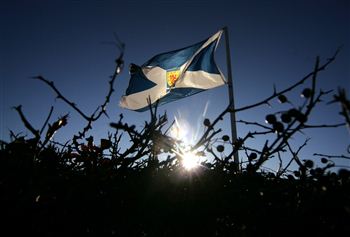 CHOCOLATE giants Mars have scored an own goal with Scots football fans for “treating the UK as if it’s England” in their latest branding drive.

The Britain-wide campaign is proving hard to swallow for Scotland fans who say they are “fed up” of hearing about their rivals playing in the South Africa tournament before it has even started.

Hamish Husband, spokesperson for the Association of Tartan Army Clubs, said: “They are treating the UK as if it’s England.

“Any Scots with any thoughts of supporting England are completely fed-up by the time the England team take to the pitch.

During the last World Cup, Mars rebranded their chocolate bar “Believe” to back England.

But the confectionary giant, based in America, insisted there was “absolutely no offence intended.”

A spokesperson said: “In some instances, it appears retailers outside of England have chosen to stock the Three Lions bar which have in turn been bought by people in those areas.

“While we are delighted it has been embraced so widely, there is absolutely no offence intended to our non-English consumers.”

Meanwhile, Glasgow’s Greaves sports store said they have taken pre-orders for the new England away strip, which is released on March 3.

A spokesman said: “The England kit has been selling will, it always does to be honest.

“It’s a nice kit and there are obviously Scots who support the team.”

5 Tips for finding immediate success with a startup