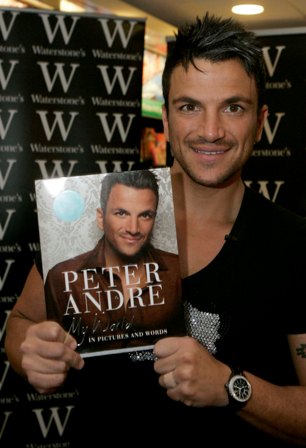 PETER Andre had ex-wife Jordan plastered yesterday – by covering up his ring tattoo of her name.

The singer is in the middle of a series of agonising laser-removal jobs and sported a flesh-coloured band-aid over the ink at a book signing in Edinburgh yesterday.

He said he hoped a Scottish girl could whisk him off his feet and make him a romantic haggis meal.

While Peter may be unlucky in love, 600 screaming Scottish fans said they didn’t care and showed they loved him anyway.

Alana McDonald, 29, from Livingston, started queuing at 7.30am to make sure she was first to meet Pete.

She said: “I sneaked in through the car park to get in first.

“I brought a pack lunch to keep me going so wouldn’t lose my place. 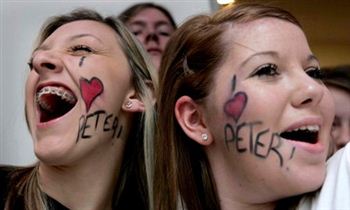 Charleigh Thompson, 16, has been a fan since 2004. She brought a copy of the book ‘My World In Pictures and Words’ for Peter to sign.

Charleigh was more direct in her appreciation of him and gushed: “He’s hot, I like his body.”

Peter said he was overwhelmed by the level of support from his Edinburgh fans.

“I’ve never been cooked haggis, I’m wondering if there’s a girl out there who would be able to cook me a proper Scottish meal.

“Every time, you just never know if anyone is going to turn up.

“It’s such an amazing feeling to see people coming along.

“I’ve got the best fans in the world.

“Last time I was here it was my birthday and everyone was singing happy birthday to me, it was amazing.”

Friends Kerryn Douglas, 14 and Bethan McAllister, 17, brought a Saltire along to welcome Peter.

Kerryn said: “He’s an amazing guy, a legend, but I don’t like Jordan.
He didn’t deserve what she did to him.”

Peter Andre’s career began as a pop singer in the early 90’s, with ‘Mysterious Girl’ hitting number two in the charts.

After his music career waned, he was again thrust into the limelight when he appeared on ‘I’m a celebrity get me out of here.’

It was during his stint on the programme that he met Katie Price, or ‘Jordan’.

The couple married and went on to have two children together.

An acrimonious divorce followed, much of it played out in the media.

Peter got Katie’s name tattooed on his ring finger two years after they married.

Weeks after the split, Jordan had her tattoo of Pete’s name obliterated with a cross.

Andre has now re-launched his music career, releasing two albums in the past two years.