A rediscovered snap to melt the snowflakes: pipe-smoking gent stands near top of Forth Bridge with not a health and safety measure in sight

IT’S a picture that will have the snowflakes melting – a man in a suit standing near the top of the Forth Bridge with not a safety precaution in sight.

The amazing snap was recently discovered in a drawer in a house in Dalgety Bay, Fife, which was sold after the elderly owner died.

Thought to have been taken as recently as the late 1970s, it shows the pipe-smoking gentleman near the top of one of the nearby bridge’s 150ft-high arches.

He is standing on a girder barely 2ft wide, with North Queensferry in the background, and looking towards the camera.

The picture was found by a worker at an Edinburgh firm called Venesky-Brown Recruitment Ltd last week after she bought the furnished home. 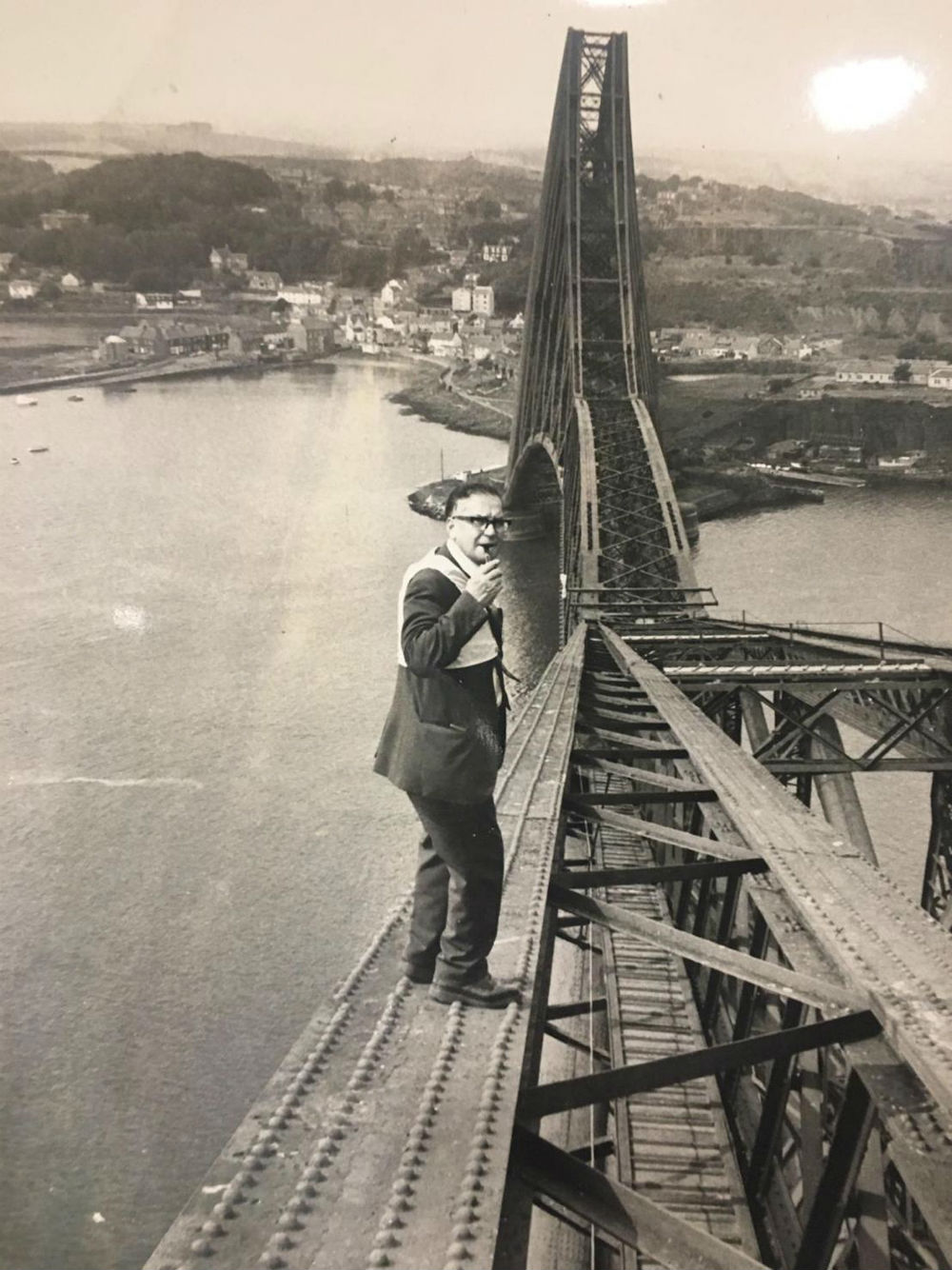 The firm uploaded the remarkable find to Twitter captioned with: “This iconic photo just shows how much health and safety wasn’t thought of back then.”

“She bought the house recently from the owners who sadly passed away and had most of their stuff still in it.

“They came across this photograph in a drawer. We have no idea how the old owner came across it.

“We are thinking maybe they worked on the bridge. We are not 100% sure who it is but we think it is my colleague’s mother-in-law’s, friend’s father, called Alistair McDonald.”

The man in the picture appears to be wearing some kind of vest over his jacket in a nod towards health and safety.

But even if he had been “lucky” enough to fall into the water the impact alone would likely have killed him. 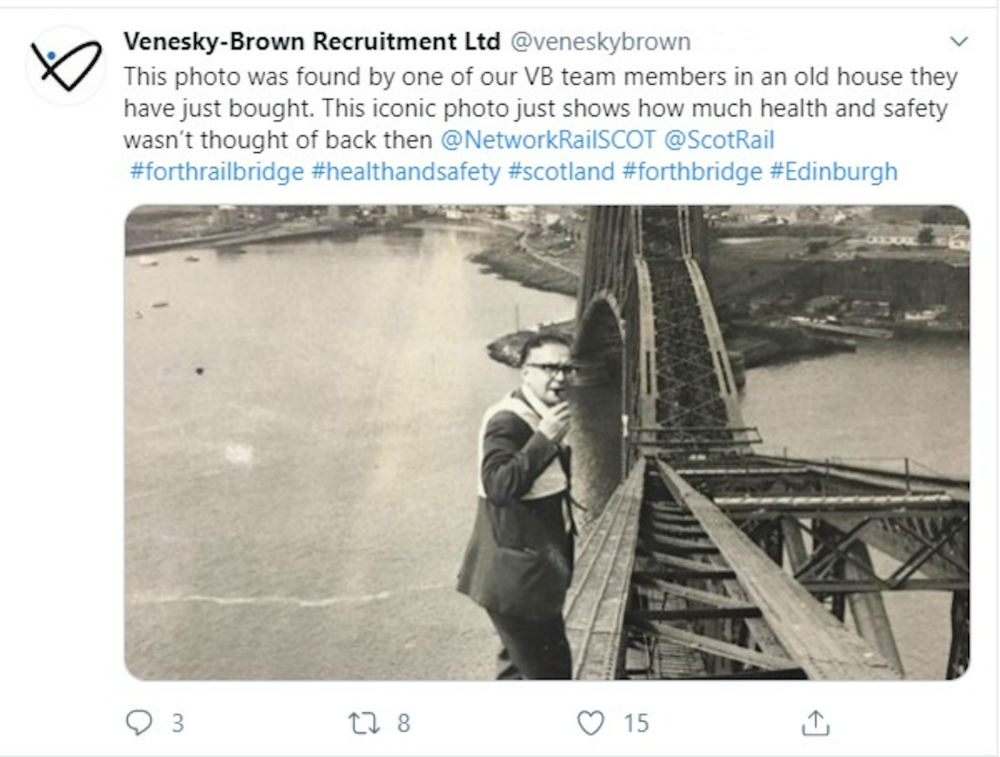 David Scarrett wrote under the post: “Love it pre health and safety.”

George Mcarthur said: “Health and safety would have a field day.”

Michael Baxter added: “Health and safety has a lot to answer for nowadays.”

Emma Stanton commented: “From a Health and Safety point of view there is clearly something wrong with this picture. Surely the pipe is a fire hazard.”

Iain Fisher added: “I think it’s a life vest in case he falls in the water – like that’ll make a difference.”

Bruce Taylor commented: “Good ol’ days before the PC brigade put up red tape everywhere. Can’t even go on a bridge without a harness n helmet these days.”

Others joked about the man in the snap. 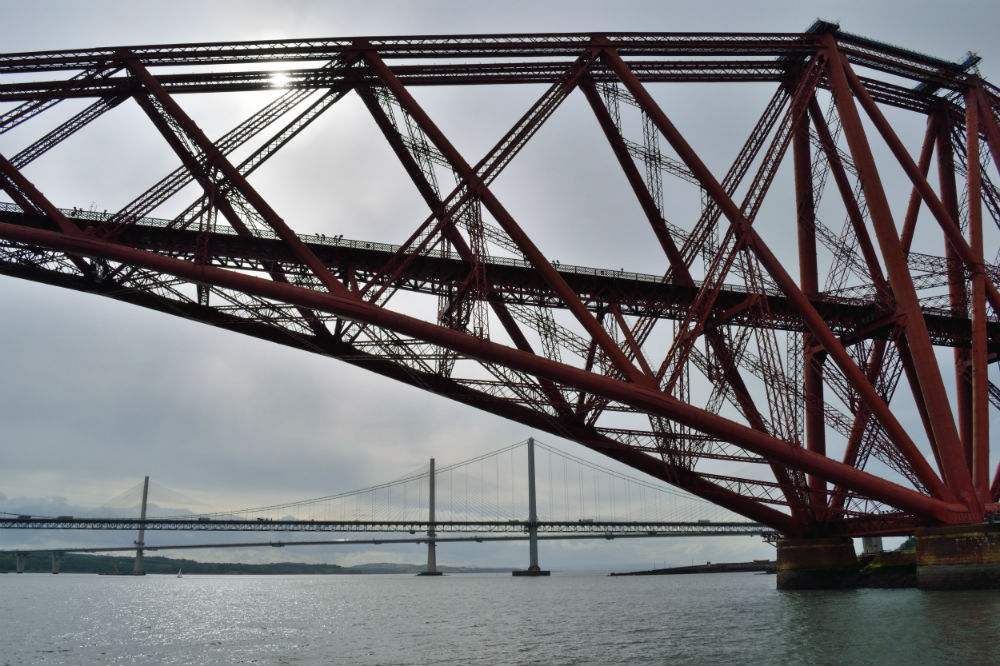 Graham Thomson joked: “The things folk will do to avoid paying for they’re train ticket.”

Jim Archibald claimed the picture could be as little as 40 years old.

“In the early 1980s the hi vis changed to the big tabard type with velcro on sides and across the shoulders so it could come off if it got snagged on a moving vehicle (train).”

While health and safety culture is regularly decried, the history of civil engineering on the Forth proves it saves lives.

The Forth Bridge opened in 1890 after claiming the lives of 73 construction workers.

Seven died during the construction of the Forth Road Bridge, which opened in 1964.

One man died during the construction of its replacement, the Queensferry Crossing, which opened two years ago.