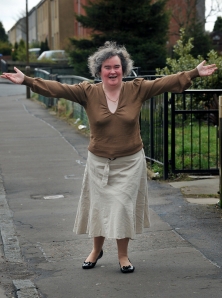 SCOTTISH singing sensation Susan Boyle will stun her fans when she performs at the final of America’s Got Talent this week – with a cover of a Rolling Stones classic.

SuBo is all set to give Mick Jagger’s 1971 song Wild Horses the Boyle touch when she appears in front of millions of Americans on Wednesday night.

Souces at the show claim Susan’s version of the popular song is “an absolute show-stopper” and will be her first single from her debut album.

The America’s Got Talent source said: “Her opening performance to promote her album will be in front of 20 million viewers – so the stakes could hardly be higher.

“But her cover of Wild Horses is sensational and people will be blown away. Simon Cowell is a very happy man right now.”

The track, which appeared on the 1971 Rolling Stones album Sticky Fingers, has been covered many times in the past including versions by Scots artists Garbage and Deacon Blue, as well as by The Cranberries, Elvis Costello and Neil Young.

The devout church-goer stunned the three Britain’s Got Talent judges, Cowell, Amanda Holden and Piers Morgan, when she appeared on the show’s auditions earlier this year singing I Dreamed A Dream, from the hit musical Les Miserables.

Within days of appearing on the show Boyle’s performance had been viewed over 100 million times on the website Youtube.

SuBo’s debut album, I Dreamed A Dream, is due to be released on November 23 on Cowell’s SyCo label and is widely tipped to become the Christmas number one on both sides of the Atlantic.

The album will also contain versions of the title track, Memory and Cry Me A River as well as other show tunes.